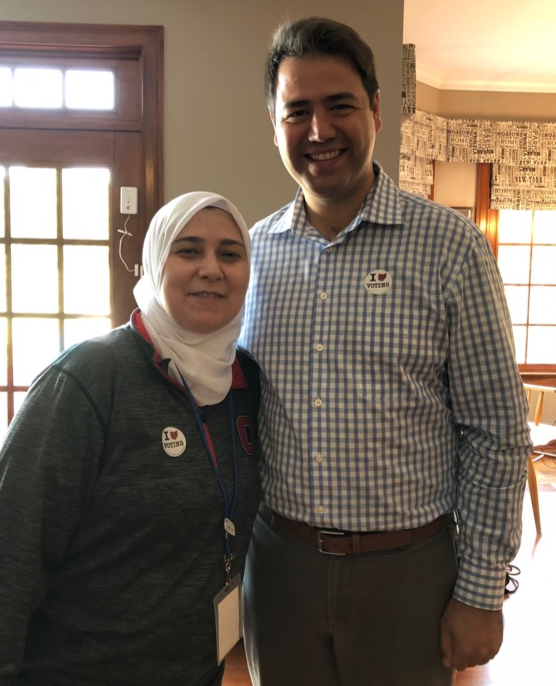 volunteers. This Spotlight is focused on Enas Yunis (right, with Danny O’Connor), who was an integral part of helping turn several Powell precincts Blue during the Special Election for Danny O’Connor, along with her two daughters.

Tell us a little bit about yourself — Where are you from?

I am a Palestinian/Jordanian, born in Kuwait. My family moved often in the Middle East. I lived equally between Kuwait, Saudi Arabia, and Jordan before moving to the United States in 1993.

My dad’s college dream was to study and live in the U.S. like his older brothers did. In 1980, he asked one of my uncles to put in the immigration paperwork for us, in hopes that my brothers would get to live out his dream. We arrived in the Summer of 1993. I was supposed to head back while my brothers would stay and study. My dad used the U.S. Embassy States and Colleges pamphlets to pick an accredited university in a small and safe town in one of the most stable states. What was supposed to be a summer vacation for me, turned into my senior high school year in Kent, Ohio!

When the time came for me to apply to schools, unlike my dad, I cared less about safety and was more interested in expanded options and flexibility. What I did not expect was that the whole family wanted a move too. My brothers and I attended The Ohio State University. I graduated five years later with two separate degrees, one in Behavioral Neuroscience and the other in Computer Science & Engineering. Both of these degrees shape how I see the world and how I chose to interact with it.

Professionally, I just completed a remote engagement with FedEx in the Cyber Security IT department and recently started a contracting role with a Central Ohio financial company in the Business-facing IT department.

I am a single mom, and have two daughters; Noor is 15 and Ayah is 13. Both got involved in the Hillary and O’Conner campaigns — Ayah was helping with the paperwork and chores of the campaigns at the staging locations, and Noor was doing the recruiter and the GOTV calls. Molly O’Connor, the Field Organizer for Hillary in 2016, has inspired and encouraged them to be the active members that they are today. Molly shared on her twitter handle a picture of her and Noor successfully recruiting nine new volunteers. https://twitter.com/mlyo25/status/782691074573791232

How did you get involved in politics and the Democratic Party?

Involvement in politics didn’t come easy to me. My mom is very protective. We grew up being taught that we cannot trust anyone in a foreign country nor openly share our political/religious views. While living in the Gulf region, we were not allowed to watch the news, read newspapers, or have friends. Jordan is a liberal country in comparison. Back then, anything normal about Jordan was viewed as a challenge to the Gulf region’s way of life.

I was living in Jordan during the first Gulf War. In a country that prides itself in liberal journalism, I was allowed to read any papers or watch any TV! People were freely discussing the papers on the buses, in the streets, the shops and at any social gathering – think New York city (but smaller) when you think of Amman – and the weather of California. My awareness about politics and its consequences could not be denied anymore. The repeating theme, as I rode the buses and listened to the average citizens lively discussions, was that no one could differentiate between truth and rhetoric. Every political speech was all too real and was all too consequential regardless of who says it or if it ever gets enacted into law or acted upon. This freedom of expression and mass confusion would not have been tolerated in Saudi Arabia.

Who is your political icon?

King Hussein of Jordan. He ascended to the throne in his teenage years. He was taught to follow orders. As his years passed  many mistakes were made. He started pushing back, and grew as a leader in the eyes of the people. His wife, Queen Noor was U.S. born and raised and never looked down at the native people of the country. She worked tirelessly to bring education and work opportunity to women in the villages. They both chose to be humble and never used force as a means to get consensus.

In the United States, I have a lot of respect for the Obamas and the Clintons, though I can see their shortcomings. In my opinion both families have some lessons to learn from my idol Oprah Winfrey. People identify with her and follow her for her compassion, understanding, and inclusion. Being female and African Amercian has not deterred white women from loving her and white men from respecting her. It was never about color or gender and this is the issue that I saw the Obamas and Clintons being challenged with in their campaign messaging.

When did you join the Democratic Party in Delaware County and why?

I do not like getting involved in politics. But when Trump came down the escalator, and the media gave him a platform, amplifying him as an influencer and an important person, I knew I had to get involved! I know the kind of person he is — like the leaders in the Middle East who are more interested in gaining and holding onto power than actually leading. I knew exactly where this election was heading. Average Americans are no different from average Jordanians or Saudis; they all can be influenced the same way into believing that they are the best people, living in the best country, and making the most rational and thoughtful decisions.

I had to take a stand from being independent to joining a party that would stop Trump from gaining power. The Republican party lost its way in an attempt to create unity and consensus among its members. The Democratic party was celebrating too early the historical significance of electing the first female president. Both parties ignored the rise of Trump and the media did not do Hillary Clinton any justice. We should not elect a person to the presidency because of their color or race. We elect the most qualified minds and stable people to the presidency regardless of color and gender.

Politics aside, I have moved a lot throughout my life due to the line of work my dad does. The Delaware County Democratic Party brought to me a sense of belonging that I have never experienced before. It feels like family. With all the good and the bad any family brings, it does not matter. We are all loved, we are all accepted, and we all belong.

What is a fun memory you have of campaigning?

The special Congressional election was during the hottest part of the summer, and in addition to canvassing I was working at the staging location at Denise McCandless’s house in Powell. Everyone was coming back all sweaty from canvassing. Except this one guy. He came back with perfect hair like he had just been to a salon. We were staring at him in his perfect outfit and hair. He noticed our stares. We even tried to find out what his secret hair products are. He made it into one of the supporting campaign photos that day while the secret lives on (or maybe not a secret now that I’ve let that secret out).

What do you want to tell the rest of the Party and our readers about the November 6 election?

After the O’Connor race there was a lot of positive energy and a lot of hope that our work has paid off, and that we are shifting our energy to make a difference. The Democrats are being realistic in terms of how much progress is expected. We are putting our foot down for our rights, our beliefs, and what we stand for. We moved the needle. We’re not there yet, but we have realistic expectations.

Keep that energy and movement going no matter what. People who only seek power will not relinquish it easily. The rest only seek the path of least resistance. Be the resistance! Be the resistance until the power grab on our Democratic Republic goes away. When the needle tips in our favor, do not assume relief. The laws/policies have to immediately be mended to protect us from the next power grab wave.

Interested in sharing your story? Send an email to communications@ohiodeladems.org.