December 15, 2018 – The DCDP Holiday Party was a big hit as over 130 Delaware Dems came together to collectively celebrate all our hard work in 2018 and to share some Holiday cheer. Special thanks to Mindy Hedges, Judy Carpenter, Marian Jacques, David Carpenter, Linda Behan, Emily Meck, and Pam Warrick-Schkolnik for all the work they did to make this an entertaining evening. And of course our gratitude to Chair, Peg Watkins and the other Officers for hosting such a festive event. Historic Merrick Hall on the OWU campus was the backdrop for the Party. A savory 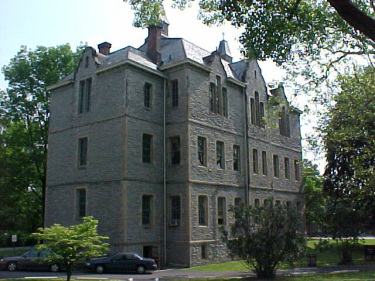 selection of buffet-style hors d’oeuvres were the bill of fare, with more than enough pastry and sweets to tempt even the most calorie conscious, served up mostly by the Holiday Party committee.  It was fun evening as we donned our Holiday apparel, and enjoyed each others’ company while strengthening our Party bonds. See pictures from the event on the DCDP Facebook page.

Peg kicked off the evening welcoming all the guests and reminding everyone of all of our accomplishments over the course of the year. See “Cheers From the Chair” for more from Peg.

Next it was time for some special gifts, where several Republicans were “honored” in absentia. Our special “Elf on the Shelf”, (Judy Carpenter, AKA ‘Della Dem’, pictured with helper,  John Kovalcik) handed out these dubious gifts to some of our party attendees in lieu of their intended recipients. See the video on Facebook.

Among the “recipients” were: