On Friday, October 26th, Fred Guttenberg, father of Jaime Guttenberg, one of the 17 victims of the Parkland massacre, made a special trip to the Columbus area, and to the Delaware County Democratic Party headquarters. He came to campaign for Danny O’Connor and to address DelaDems about his tireless work for Gun Safety.

During your talk you said one of your goals is making the gun lobby as irrelevant as the tobacco lobby. How do you see accomplishing that?

Well, a lot of ways. Number one, electing public officials who are going to kick the current officials out of their office. Their power doesn’t come from their membership; their power comes from the money they get from gun manufacturers to spend on legislators that have 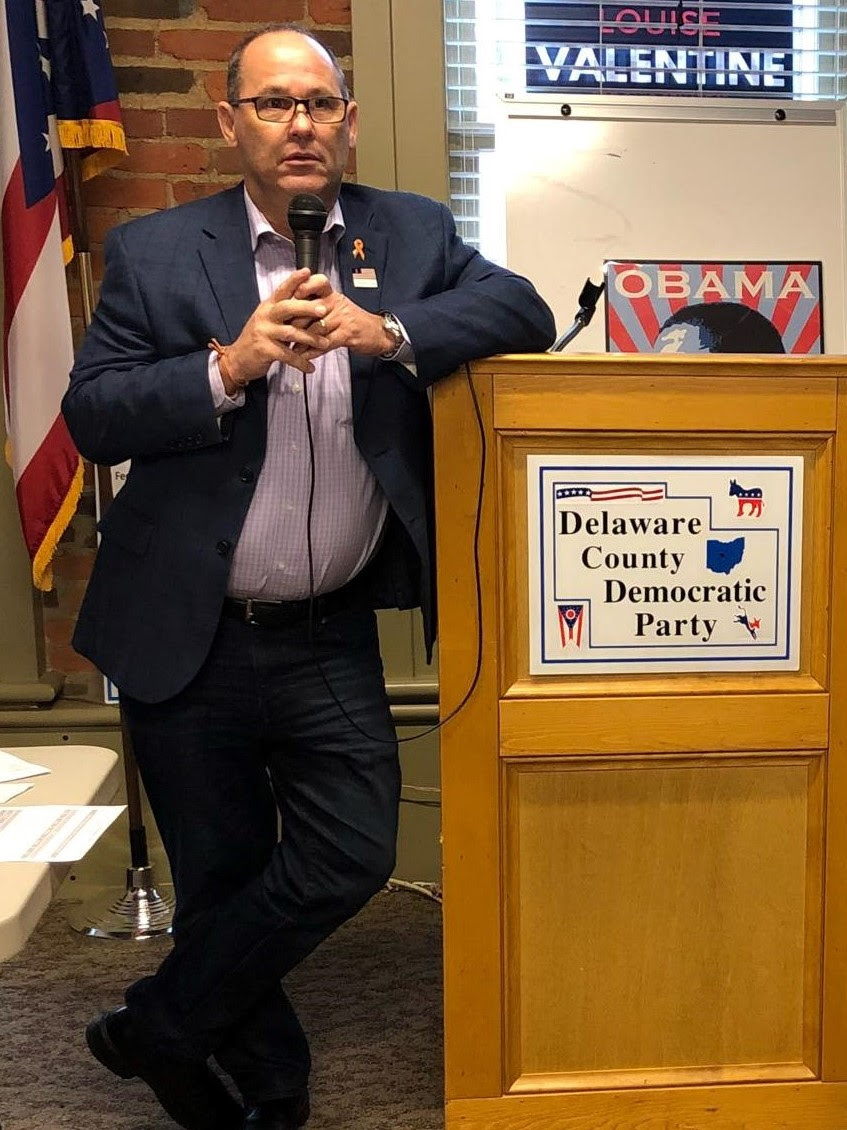 been receptive. If we get rid of those legislators, that’s step number one. The other way is going to be through litigation. I’m taking these gun manufacturers on in court. That’s how the tobacco lobbyists eventually became irrelevant. When they had to go to court, everyone learned they were lying. They knew their products were addictive; they knew people were going to die and it was the start of their downfall. I want to be clear to people that these gun manufacturers know that they are setting sales targets that have only one inevitable result and that is innocent people dying.

The teens from Parkland are very visible. Do you work with them? 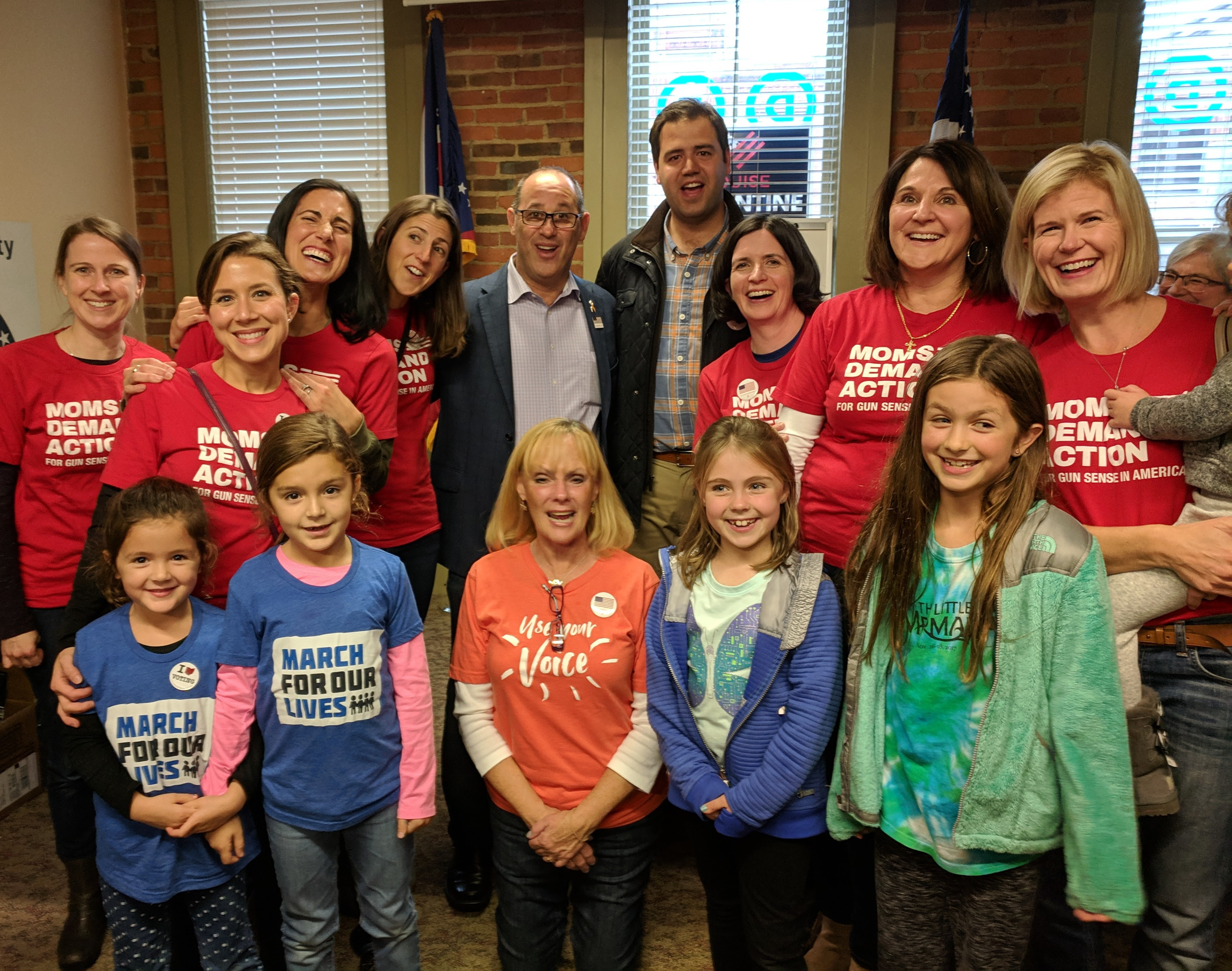 You know, I call them “my kids” because they’re great kids, but I’ve never actually been part of that group. They’re their own entity. They’ve done amazing things to get the youth energized and organized. You know every concern I might have had about the youth of our country, because they’re so wrapped up in their cell phones, I don’t have anymore. What I’ve learned is that cell phone is their power and became their way to communicate, organize, and get their message out.

Your first foray into the national scene was challenging Marco Rubio during the CNN Town Hall. How did you prepare and how comfortable did you feel in that environment?

It was exactly seven days after my daughter was killed, and I knew I was going to have an opportunity to ask a question. I didn’t really prepare. I listened to his comments  earlier that day, and the comments of the President about what happened. And they didn’t even use the word “guns”. It was a gun incident and they didn’t use the word guns, and I was just pissed. And I think when I started to question Rubio that anger came out, and it hasn’t gone away.

Your name in German means, “good mountain”. I know you see this as a steep climb, but do think you can reach the summit?

This to me is just a mission, and it is an upward climb. I think we’re getting there. What we’ve done since February in this movement is more than happened in the 20 years prior. And my goal, my measure of success, will be if when the new congress sits you have returning members of the house and the senate who know somebody new is sitting next to them because the other person got fired because of their stand on this issue and we make this a mandate issue going forward which will give people the courage to act on it.

“Orange Ribbons for Jaime”. Tell us a little more about that.

My daughter’s favorite color was orange. The night she died all her friends came over wearing orange ribbons and it turns out it’s also the color of the gun safety movement. When I learned that is when I decided to start this foundation. It is designed to honor those things that were important to my daughter in her life, whether it was dance, anti-bullying, kids with special needs, the humane society, all the things she loved, but also to make sure we deal with the reality of what it was that led to the shortness of her life and that’s educating on the issue of gun safety.

The attempted handshake with Kavanaugh. Everyone asks you about that, but what were you trying to say to him, and what did you expect out of that interaction?

With every single person I meet in DC I say “Hi, my name is Fred Guttenberg, father of Jaime Guttenberg who was murdered in Parkland.” When I got to the “murder in Parkland” part is when [Kavanaugh] turned around. What I was hoping to say was very simple: I wanted to remind him that he lived in a community very similar to Parkland, the kind of community you think “this will never happen” in. But it did. And I wanted him to look at the father of someone who deals with this, and to remember my face when he hears those cases that the NRA is counting on him to go one way with. I wanted him to know there’s another side to it, and I wanted him to hear it from me.