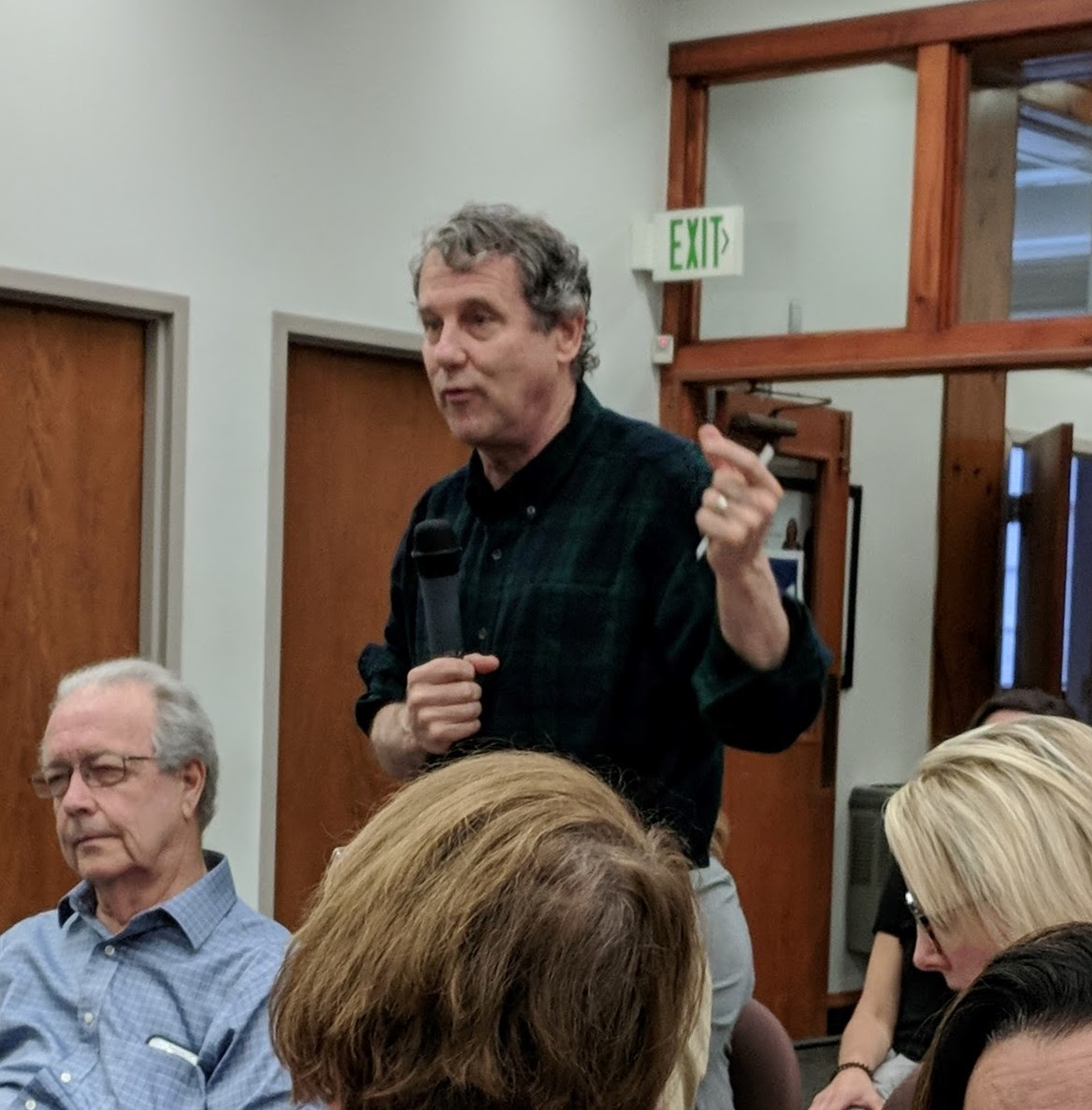 Messaging called “From the Brains to the Ballot Box”. It was hosted by the Shaker Heights Democratic Club and featured Political Consultant, Drew Westen who holds a Ph.D.  from Harvard. Westen teaches at Emory University, has advised state legislative and national candidates, including Presidents, and has done trainings with state Parties and local groups on political messaging. Senator Sherrod Brown (right) was in attendance.

The purpose of the seminar was to help develop an understanding of how we process messaging, and how political campaigns use that knowledge to craft their campaign messaging through rigorous, clinical testing procedures (you didn’t think that Sarah Palin came up with “death panels” all by herself, did you?). The goal was to improve how to best talk about our candidates and the issues that move Ohio voters.

We know person-to-person contact is critical to winning elections, and still, many people feel uncomfortable with how to talk about and promote our candidates and their positions while phone banking, canvassing, or just talking with friends, family, neighbors, and colleagues. We often hear, “What should I say? What’s our message?”

Make Statements at an Uncomplicated Level

One of the key takeaways is that Republicans operate at the 10,000 foot level (simple, with strong, uncomplicated wording) while Democrats tend to overcomplicate their messaging and it gets lost in the weeds. One of the reasons the 10,000-foot tactic works so well for Republicans (think: “Death Panels” , “MAGA”, “Revolving Door Justice”, “Bankrupting Rainy Day funds”, “rape kits”, etc.) is that emotional messages have more impact because of the way our brains are wired. As a result, messages with an emotional element get embedded into our consciousness with more urgency and impact than messages based on reasoning.

With “Make America Great Again”. The word “Great” triggers and activates all sorts of emotional triggers. Can you remember Hillary’s slogan? (“Stronger Together”).  Westen explained that we need to use the Brains we have, not the Brains we want. Democratic campaigns expect their messaging to hit the “reasoning” part of the brain, which takes too long, with too many layers. So, for many it won’t stick.

Remember “When they go Low, We go High”? Westen believes this is a recipe for four more years of Republican leadership. He suggests that taking the high road, while maybe true to our Democratic principles, allows the opposition the opportunity to monopolize the emotional brain centers. If we say nothing, then we allow the other side to create the emotional responses and control the narrative. We need to address the opposition message right away. So maybe folks like Eric Holder and Joe Biden are on the right track.

Whoever controls “us v. them” wins the narrative.

Most immigrants are not Mexicans; we’ve let the Republicans create the face of immigrants. When they say “immigrant” people already think “illegal”. Ten years ago, you thought of your father. We need to remind people that, except for slaves, “everyone immigrated to the US”.

Never say the “unemployed” – say “people who have lost their jobs”. It gives a face to the nameless and uses an action word instead of making it sound passive. Use “people who…” whenever possible to always relate back to the people and to the community.

Similarly, don’t use terms like “the underemployed”. People don’t know who or what you’re talking about. Talk about “people who have to take two to three jobs to get by”. THAT is the emotional message we want to implant.

Be aware of stereotypes. Don’t use the term “Medicaid recipient”; this terminology stimulates unconscious prejudice against people of color. Instead say “people who rely on Medicaid for their health care.”

When talking about Social Security connect it to the notion of “dignity in later life”. This is a strong and compelling message.

Be careful with acronyms or repeating catchy names for legislation. The names are usually vague and don’t allow the ability to trigger an emotional response. People may not really understand “ACA” or the Affordable Care Act. Think about saying: “It’s a Family Doctor for every Family who wants one”. “Citizens United” sounds Democratic but is anything but. It is “uncontrolled and unaccountable campaign contributions.” And Westen suggests that the language of activists and partisans is usually the wrong language for the public.

And how to respond to Republican talking points:

Republicans like to talk about “Big Business”, but Democrats need to draw a distinction between good corporate citizens and bad ones. And we should talk about “small business” whenever we can. Republicans will say they are all about small businesses, and that Democratic regulations are stopping them. Democrat’s answer should remind all about the “safety factor of regulations, and government grants that allowed so many small business people to open their businesses in the first place”.

Republicans still talk about “trickle down” benefits of tax breaks (for the corporations and wealthy). Democratic response: “why not cut out the middleman and give it directly to the working man?”

When people ask about the basic differences between Democrats and Republicans: One quick response is: “They want guns and bombs, Democrats want to feed and care for families.” Or: “As a Democrat when we go to our house of worship with two coats and our brother or sister has none, we give them a coat. Republicans believe if your brother or sister has no coat, they then take their shoes.”

Someone called you the “L” word (Liberal)? One response: “seems to me that people that put in a hard day’s work should get living wages and benefits, shouldn’t have to work two jobs, and shouldn’t have to choose between drugs and dinner. If that makes me liberal, or a lefty, then I’m proud of that.”

And finally, we should use “Right” and “Wrong” in our messaging. Keep it simple. But the point is not to dumb down the political messages but to increase the emotional intelligence. If you feel something, help people feel it with you.