DCDP at the Delaware County Fair

Do you know the song, County Fair, by Bruce Springsteen? This song epitomizes the sounds, feel and tastes of our County Fair, which just ended on Saturday, September 22.

“County fair, county fair
Everybody in town will be there
So come on, hey, we’re goin’ down there
Hey little girl with the long blond hair
Come win your daddy one of them stuffed bears
Baby down at the county fair… ”

There’s nothing that smells so good, feels so good, or is so much fun as being involved in the County Fair. If you merge that involvement with something that makes a difference in our world, it’s even better.

The operation of putting together the Delaware County Fair booth and enlisting volunteers to work the booth from 10am – 9pm for 8 days is difficult and time consuming, but has been 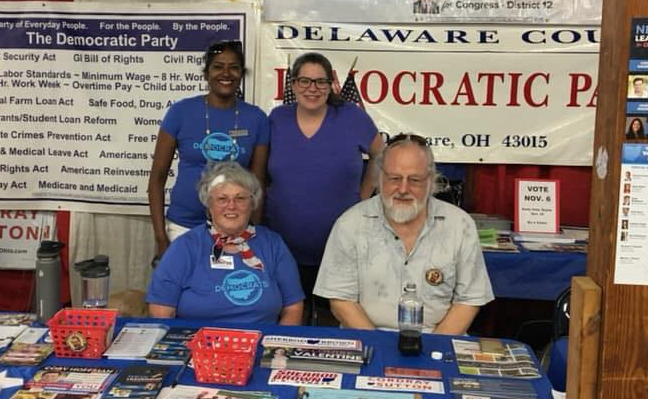 accomplished so well over the past two years by Greg Hankins and Julie Houston. Both have been involved in volunteering for the fair for “way too long to count”.   They were asked a couple of questions about their experiences in working and managing the Fair for the Delaware County Democratic Party table:

What has been your most fun experience?

Greg: “Working with the kids. Asking them if they ever voted before, no matter what their age. When we ask the fairgoers what their favorite fair food is, we let them vote on it, by day, and then post the winners on a board from the previous day. On the 1st Saturday of this year’s Fair, we got 171 votes!

Another great experience was this year when I got to swap jokes with Kathleen Tate.”

Julie: “It was exciting last year when we kicked off the Favorite Fair Food Voting idea. Before that, we had trouble with encouraging people coming over. Now they enjoy coming.”

What has been your least enjoyable experience?

Greg:   “I can’t say I have had any bad experiences at the Fair. I am a debater, so I enjoy getting into discussions with all people here.”

Julie: “12 years ago, I was sitting on the floor with a new mommy who was nursing her child. An Anti-Choice man came over to our booth, shoving a pamphlet in our faces and verbally abusing us.   That year, we had an Anti-Choice booth around the corner from our booth.

I went crazy, mostly because he had a lot of nerve approaching a woman nursing her child. And his approach did no good, but only made both of us angry.”

Both: “It was upsetting with our stand-up Hillary and Barack look alikes were stolen from our booth at the 2016 fair. Ed filed a report with the Sheriff, and the two showed up at a Buckeye Valley football game. When the Sheriff called Ed and was asked if he wanted to press charges, he said no, as he thought just the embarrassment of having the sheriff take them back while all their friends and parents were there was enough penance.   We were happy to find out that it was just a couple of teens and not someone who wanted to do more harm to the Democratic Party.

And finally, both Julie and Greg to me that the main goal of having tables at the Fair is to show people in the community that the Democratic Party exists, we don’t have crazy ideas and that we are family people who want the best for our children. We are slowly breaking down their stereotypes.