We asked some of our local candidates to share their thoughts about running for office. Each was a first-time candidate, and here’s what they had to say:

Many people think running for office must be boring, but it can actually be a lot of fun! On the first Friday of each month throughout the year, the City of Delaware hosts a little festival downtown they call — wait for it — “First Friday.” On one such First Friday in October, as I was walking to the Delaware County Democratic Party’s tent – I noticed a couple of guys

dressed up like Ghostbusters taking pictures with little kids. As a huge Ghostbusters fan, I had to introduce myself to them and ask how and where they got such authentic looking costumes. When I did so, I noticed that they had picked up one of my yard signs from the Dem’s tent, and it was sitting in the back of their mock “Ecto-1.” I thought that was awesome and I mentioned to them that if I was going to be in politics I had dreamed of making a campaign ad based on the commercials from Ghostbusters I and II. They knew immediately what I was talking about, and it just so happens that one of the guys actually makes commercials and ads for a living! And so, we agreed to give it a go, and our Ghostbusters Tribute campaign ad “Who Ya Gonna Vote” went viral. Many people found it to be a refreshing deviation from conventional political ads, it even got covered by the Washington Post, and at least a few political science professors are planning to show it in their upcoming classes.

So what’s the bottom line? The greatest prize that life has to offer is to work hard at work worth doing. if you believe in your soul the world can be a better place, there is nothing more worth doing nor more rewarding than campaigning for public office while evangelizing the ideals of the Democratic Party, justice, and a more perfect union. Being a candidate is a chance to spread the Good News — that the world can be better!
I’ll finish by referencing a quote by the great Philosopher Bertrand Russell. He once said, “The trouble with the world is that the stupid are cocksure and the intelligent are full of doubt.” This quote perfectly sums up many people who run for office versus those who don’t. This is particularly true with regard to our lovely delegation of Republican legislators here in Delaware County! Kris Jordan’s IQ is so low he probably trips over it and almost shoots himself with his concealed handgun on a daily basis, but alas the guy’s a legislator!
If you’re thinking of running for office, and you doubt that you could do it or that you may not be qualified — that is a feature, not a bug! And, let me tell you that, yes, you can do it. And, you’re probably as qualified or more so than the majority of people currently running things. The only difference between you and people who are in office is that they believed they could do it. Please! Join us in the arena and run for office and we’ll help you in any way that we can! “The only people who change the world are those crazy enough to try!”

I never had an epiphany moment when the light-bulb went off that I would run for office. After the 2016 election, I was talking with a friend who follows politics very closely and we joked that 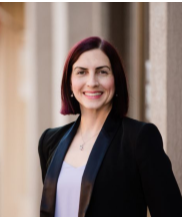 if Trump could run and win anyone could… maybe even me. After we stopped laughing at the prospect of me as an elected official, I actually started doing some research into who my representatives were, what their backgrounds were and what the qualifications were to even run for those offices. I’ll be honest, I didn’t know the answers to these questions. I didn’t like what I found out and thought about what the future of Ohio would look like for the next generation, my children, if some changes weren’t made. At this point I knew I just needed to get involved and start really paying attention.

I started attending Delaware County Democratic Party meetings, going to events like citizen lobby days, signing up for “running for office” training by different local and national organizations, just to start getting my feet wet to see what state politics really entailed and what it would take if I wanted to run. Admittedly, it’s not easy to get engaged when you’re working a full time job and raising two small children, but I got to a point where I was angry with who was supposed to be representing us. I wanted better for Ohio, so I made time. An hour here and an hour there really started to add up. After returning from an intensive four-day training in DC in July 2017, I wasn’t scared away from running and knew that if I hadn’t thrown in the towel on this idea by now, I should move forward.

Running for office was easily one of the most stressful things I’ve done, but it has also been one of the most rewarding. I was, and continue to be, humbled by the support I received. So many people living in State Senate District 19 just want to be heard and have viable choices on the ballot, and it was empowering to know that I was part of something much bigger than just my ideas.

Democracy doesn’t happen on its own; we have to fight for it. I hope there are some driven individuals reading this right now who will at least entertain the idea, because we need you in this fight.

I was a non-political person who had no political aspirations. But after the 2016 Presidential election I was sick of seeing the GOP destroying our safety net in the name of deregulation. I

was sick of not having a choice in Delaware County to vote for anybody but a Republican.

I filed my papers in February to get on the ballot. For the next nine months, life was a roller coaster. Since I did not have a campaign manager, I had to do everything myself, including collecting funds, designing and printing literature, managing finances, managing social media accounts, and much more.

There was never a dull moment during this campaign. I was able to meet so many wonderful people and build lasting friendships. My kids loved tagging along to the First Friday events and Farmers’ Market. Emily’s List, Progressive Change Committee, ODP, Run for Something and Facebook groups were all excellent resources. The support that the DCDP provided was incredible.

Now that we have built a foundation, it will be so much easier to run. When people come up to you and say “I voted for you,” it makes you tear up and realize that it was so worth it. So, if I can run for office, you definitely can. I have no regrets and I would consider running again in a heartbeat.